The Governor will host Investiture Ceremonies this week, showcasing Western Australians who have served our State, and Australia selflessly, showing passion and commitment to community.

844 Australians were announced on the Australia Day Honours list, with 63 being invested at Government House this week. The ceremonies will be live-streamed to enable Government House to deal with social distancing requirements, whilst also allowing family and friends in regional WA the chance to see their loved ones receive their medals from the Governor.

Live-streaming can be accessed 15 minutes before the commencement of the ceremonies by clicking on the link/s below. 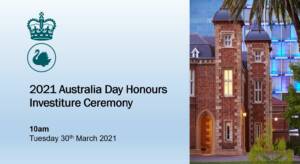 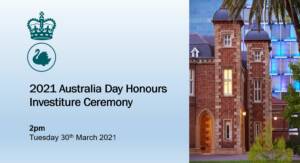 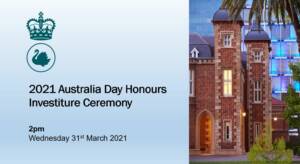 “The individuals we celebrate today come from all parts of our great nation and have served the community in almost every way conceivable. They’re diverse and unique but there are some common characteristics, including selflessness, commitment and dedication.

“Recipients have not put their hand up to be recognised. Most would consider the achievements that they are being recognised for to be ‘ordinary’ or just what they do. Therein is the great strength of our system – recipients in the Order of Australia have been nominated by their peers, considered by an independent process and, today, recognised by the nation.

“The sum of these contributions speaks to our nation’s greatest strength – its people.”

Investiture ceremonies will take place on Tuesday 30th March and Wednesday 31st March at Government House. A list of individuals, and the awards they will be receiving, are outlined below, according to the ceremony the individuals were invested at.