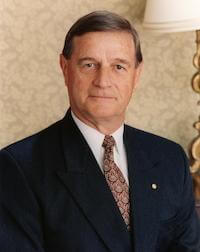 Lieutenant-General Sanderson was born in 1940 in Geraldton and later educated at Bunbury Senior High School in the State’s south west. He entered the Royal Military College, Duntroon in 1958 and graduated as a lieutenant into the Royal Australian Engineers in 1961.

He and his wife, Lorraine, have one son and two daughters.

His nearly four decades of dedicated service culminated in his appointment to the pinnacle of Australian Military service as Chief of the Army in 1995.

He had been retired for two years and was living in Canberra when he was approached to become Western Australia’s Governor. He was sworn in as the State’s 29th Governor on 18 August 2000, and was in office until 31 October 2005.