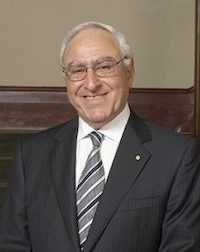 Dr Ken Michael is Western Australia’s first Governor from Greek heritage. Born in Perth in 1938, he is the son of migrants from the island of Castellorizo in Greece.

He attended Highgate Primary School. Only eight years old when his father passed away, he was fortunate to have support from his family, Perth Legacy and the then Department of Repatriation (now Veterans Affairs) which gave him the opportunity to pursue his education.

He studied at Perth Boys High School and Perth Modern School before embarking on his educational pursuits at the University of Western Australia. He undertook postgraduate studies at the Imperial College of Science and Technology in London under a scholarship and was awarded a PhD degree in engineering from the University of London in 1968.

He and his wife Julie have two children, a son and a daughter.

His career as a bridge design engineer with the Main Roads Department spanned 30 years and in 1991 he was appointed Commissioner of Main Roads, a position he held for over six years.

He was appointed Chancellor of the University of Western Australia in April 2001 and retired from that appointment in December 2005.

Dr Ken Michael AC is a distinguished engineer in his own right, but is better known for his tireless and respected contribution to many aspects of government, business and community activity within Western Australia.